Hardware refers to the physical components of a computer. Computer Hardware is any part of the computer that we can touch these parts. These are the primary electronic devices used to build up the computer. Examples of hardware in a computer are the Processor, Memory Devices, Monitor, Printer, Keyboard, Mouse, and the Central Processing Unit.

Software is a collection of instructions, procedures, documentation that performs different tasks on a computer system. we can say also Computer Software is a programming code executed on a computer processor. The code can be machine-level code or the code written for an operating system. Examples of software are Ms Word, Excel, Power Point, Google Chrome, Photoshop, MySQL etc.

Application Software is the type of software that runs as per user request. It runs on the platform which is provided by system software. High level languages are used to write the application software. Its a specific purpose software. 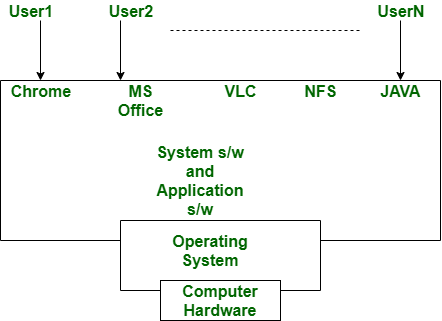 In above diagram, we can clearly see that the system and application program or software depend upon the operating system which is act as the interface between user and computer hardware.

A kernel is the core component of an operating system. It is also a system program. It is the part of Operating System which converts user commands into machine language.

It is a system program that provides interface between user and computer. When machine boots up Operating System is the first program that loads.

The kernel is so named because—like a seed inside a hard shell—it exists within the OS and controls all the major functions of the hardware, whether it’s a phone, laptop, server, or any other kind of computer.

The main purpose of a computer is to run a predefined sequence of instructions, known as a program. A program under execution is often referred to as a process. Now, most special purpose computers are meant to run a single process, but in a sophisticated system such a general purpose computer, are intended to run many processes simultaneously. Any kind of process requires hardware resources such are Memory, Processor time, Storage space, etc. In a General Purpose Computer running many processes simultaneously, we need a middle layer to manage the distribution of the hardware resources of the computer efficiently and fairly among all the various processes running on the computer. This middle layer is referred to as the kernel. Basically the kernel virtualizes the common hardware resources of the computer to provide each process with its own virtual resources. This makes the process seem as it is the sole process running on the machine. The kernel is also responsible for preventing and mitigating conflicts between different processes. This schematically represented as: 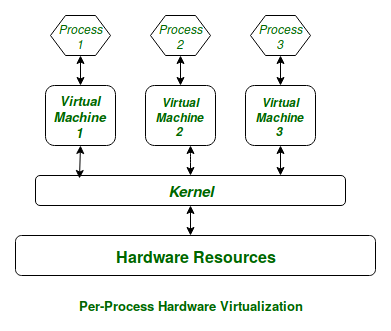